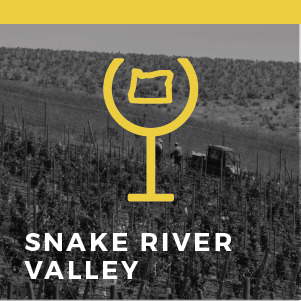 From a purely geographical standpoint, the Snake River Valley offers ideal growing conditions. Wine grapes thrive in this distinctly four-season climate. The characteristic cold winters, which might at first seem a disadvantage, are in fact quite conducive, allowing vines to go dormant, to rest and conserve important carbohydrates for the coming season, while ridding the plants of bugs and discouraging disease.

Located on the same latitude as Oregon’s Umpqua Valley AVA, the Snake River Valley has a diurnal temperature variation of 30-40 oF (16.5-22 oC). This swing is more dramatic than most other appellations in the Pacific Northwest due to the high elevation of most of the region’s vineyards. The region’s combination of cold nights and warm days during the summer serves to balance grape acids and sugars favorably.

To date there have been few wines produced from the Oregon side of this region, but it continues to evolve and grow. With similar latitudes comparable to many famous wine regions from around the world (43° – 46°), the Snake River AVA has a very bright future.

Approved in April 2007, Snake River Valley AVA is thinly populated with wineries and vineyards in Oregon, yet it features the largest density of vineyards and wineries in Idaho.