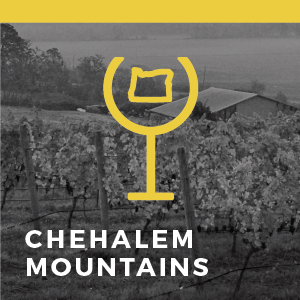 The Chehalem Mountains AVA is contained within the Willamette Valley AVA and is located 19 miles (30 km) southwest of Portland and 45 miles (70 km) east of the Pacific Ocean. The region is defined by its namesake Chehalem Mountains, a single landmass made up of several hilltops, ridges and spurs with the tallest point, Bald Peak, at 1,633 feet (498 m) above sea level. These mountains, identified as the highest in the Willamette Valley, greatly impact the vineyards by sheltering them from winds blowing south through the Columbia Gorge.

Volcanic soils, marine sedimentary soils and a distinct series of loess called Laurelwood can all be found throughout the Chehalem Mountains AVA. Most of the vineyards are planted between 200 and 1,000 feet (60-305 m) elevation. Due to its great diversity, leaders are continually working to learn the intricacies of the land and further define their region. In 2005, Ribbon Ridge, contained within the Chehalem Mountains AVA, was approved as an AVA defined by its Willakenzie series of sedimentary soil.

With such diversity of elevations, soils and aspects, this region offers wines of great complexity and intrigue. The cool climate and endless combinations of soils and elevations produce wines with defined structure, offering notes of strawberries and cherries in cooler vintages and darker fruit in riper years.

Chehalem Mountains’ winegrowing history dates back to 1968 when UC Davis alum Dick Erath purchased 49 acres (20 ha) on Dopp Road in Yamhill County. He aptly called the property Chehalem Mountain Vineyard. By the mid to late 1970s, there was a patchwork of vineyards in the area, including those owned by the now-recognizable founders Adelsheims and the Ponzis. The Chehalem Mountains AVA was formally approved in 2006.