Week 2 dives into the Oregon wine industry’s ongoing commitment to protecting our land. Access the curriculum.

>>Let’s pretend you are at work and would like to make the point to a guest/customer that Oregon’s wine industry values environmental sustainability. What are three points you will make to support that argument? Explain each. 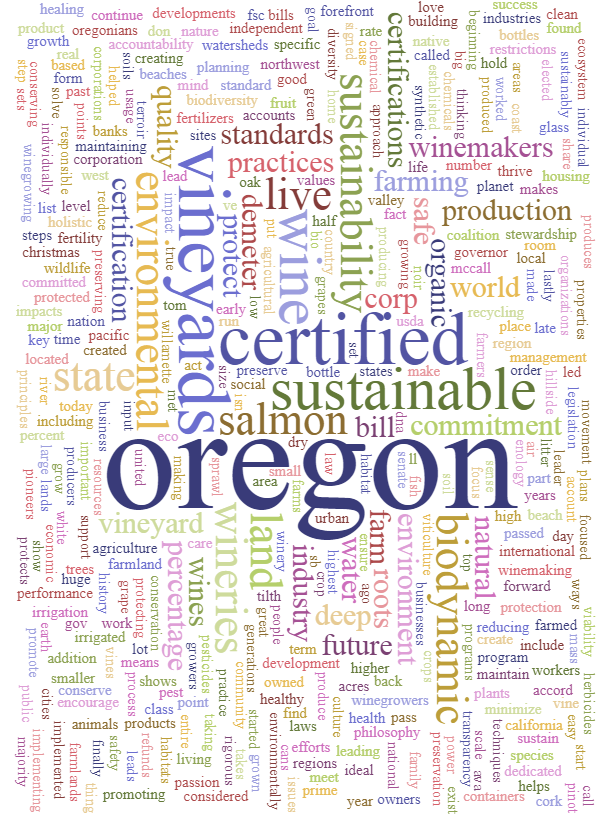 A compilation of responses to this question.

Let us first start by taking a step back and defining sustainability. One definition of the word meaning the ability to maintain at a certain level or rate, and the second is the avoidance of the depletion of natural resources in order to maintain an ecological balance. How does Oregon’s wine industry value this you might ask? The answer is not as simple as it may seem. However, many different bills as well as programs were set in place to preserve viticulture as an entirety without fear of losing the integrity of the wine produced, and some of which stand out as key components/events in the history of Oregon’s viticulture as a whole.

A big influence and a hero to the community Tom McCall, who was elected as governor in 1966 has the biggest role to play in Oregon’s forward thinking. He paved the way to preserve the beauty of Oregon starting with the Beach Bill in 1967. This granted public recreational rights to the dry sand of Oregon beaches and in doing so protecting them from the threat of future urban development. Gov. McCall didn’t stop there, in 1971 he worked to pass the nation’s first Bottle Bill. This implemented refunds on soft drinks, beer bottles, and water containers which in turn reduced the amount of litter and increased consumer recycling. As he strived for change, in 1973 Gov. McCall signed into law the Oregon Senate Bill 100. This created an institutional structure for statewide land-use planning, placing restriction on the urban sprawl into farmland and required cities/counties to adopt comprehensive land-use plans which resulted in prime vineyard land protection from future housing development. Without his passion and hard work, it is uncertain to say if some vineyards would still be here today as well as future sites to come.

Another important influence on Oregon’s journey towards viticultural sustainability, and in some ways the start of a new wave of wine, is the Demeter Certified Biodynamic program, which stands by the philosophy “healing the planet through agriculture”. These practices opened a new window of opportunity for the viticulturist as well as the consumer, who are becoming more and more aware of how poor agricultural standards can impact product/planet. Oregon accounts for 52% of total U.S Biodynamic vineyard acres and will hopefully get the ball rolling and will soon be joined by other states with the same drive and vision. Teamed up with other organizations like the Deep Roots Coalition, B Corp, LIVE (Low Input Viticulture and Enology), etc. Oregon truly is creating a bright future filled with green possibilities. “It’s here in the culture; it’s here in the air. The very DNA of Oregon wine-growing is sympathetic to this non-interventionist, naturalist, small-scale form of farming and winemaking” – Matt Kramer, Wine Spectator.

Oregon remains the standard that everyone should aspire to be in regards to environmental sustainability. In a time period when much of the United States was looking to development and progression, Oregon passed the Oregon Senate Bill 100 that protected both farmlands and future vineyard sites. This wasn’t done to impede progress, but rather with forethought of the importance of agriculture and viticulture for the future. Additionally, even though Oregon ranks behind others in total vineyard acres, it accounts for 52% of Demeter Biodynamic certified vineyard acres. This certification reflects working in harmony with the environment, while not damaging it with dangerous chemicals to improve both the grapes grown as well as the entire ecosystem around them. Finally, Oregon’s Willamette Valley has the Deep Roots Coalition, which speaks to water preservation. It requires vineyards not to utilize irrigation or to even source grapes from vineyards that do so. The Deep Roots Coalition also has an academic facet, studying water usage and its results to hopefully further this important idea beyond Willamette Valley.